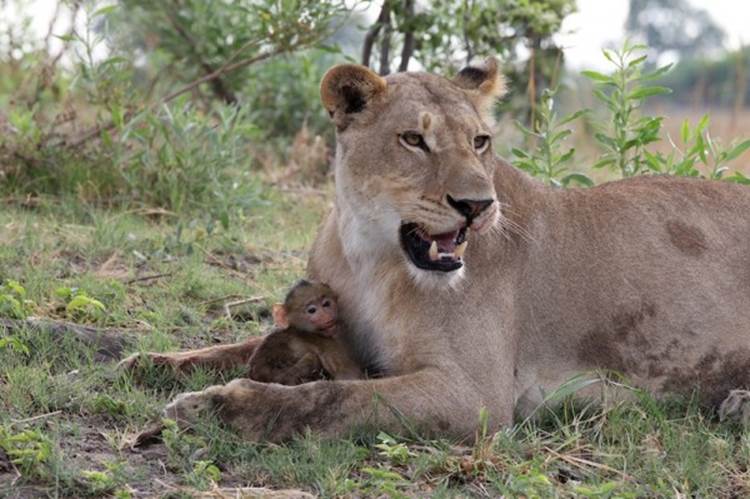 Lions and Baboons – a Botswana Encounter

The African wilds can be a merciless place, a place where “eat or be eaten” and “survivial of the fittest” ring very true. But sometimes even the most dangerous of animals can surprise us.

Photographer Evan Schiller and Lisa Holzwarth were on a game drive in the northern Botswana’s Selinda area when they came across a big troop of baboons charging through the bush. “30-40 baboons were heading in our general direction making a lot of noise,” Lisa recalls. The baboons were obviously frightened by something and they all scampered up trees, shouting, alarming, and making a big scene. It quickly became clear what the problem was: two large lionesses came out of the tall grass and rushed the baboons into the trees, soon joined by two more lionesses. “Between the baboons shrieking and the lionesses communicating with deep guttural roars, it was a mad scene,” Lisa says.

But then the real chaos began! One brave baboon descended the dead tree and tried to make a run for it. but got snapped up in the jaws of a lioness.

The lioness grabbed a female baboon on the run. But as the baboon lay dying in the jaws of the lioness, the viewers realised there was something else there; an infant baboon (less than a month old) slowly disengaged from its mother’s body. 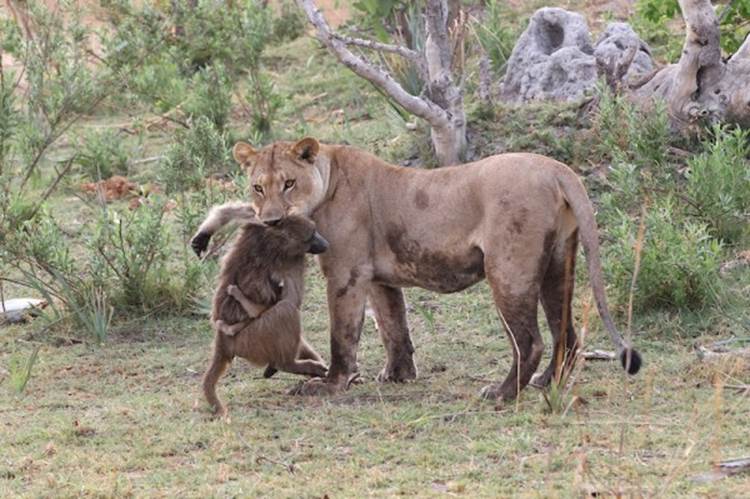 Instinct took over and the baby tried to make a go for a tree, but did not have the strength to climb. At this point the lioness noticed the “little guy” and went over to investigate, but instead of snapping the baby up in a deadly movement as every one expected her to do, she started to play with the baboon. To everyone’s amazement she was both inquisitive and gentle with the infant baboon. 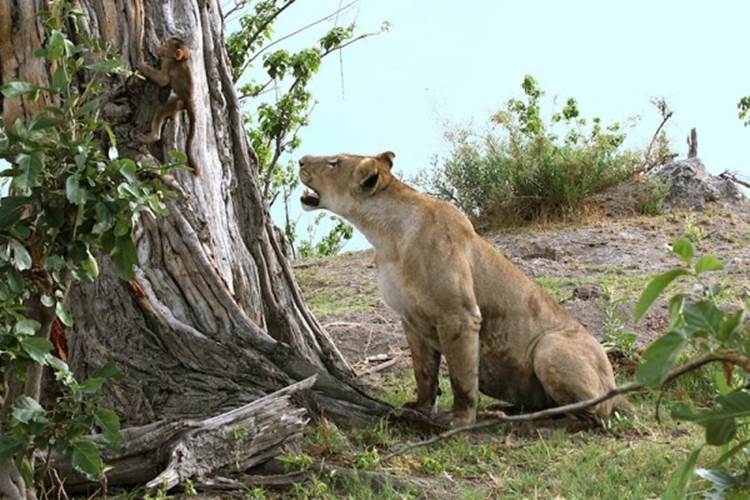 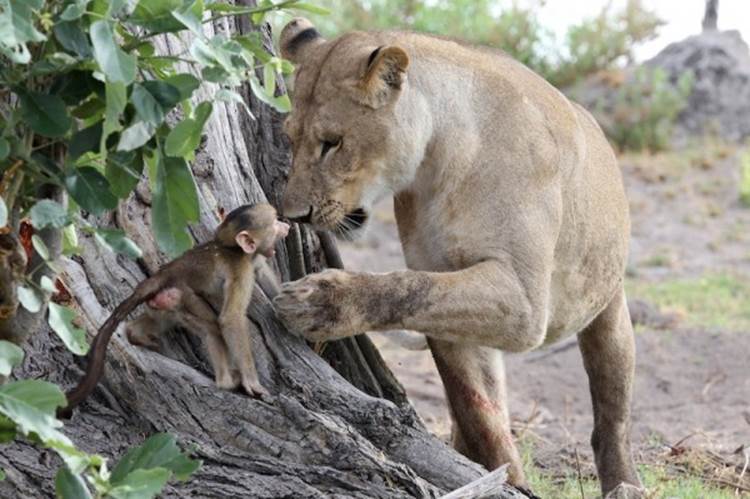 After a while she picked up the baboon softly in her mouth and walked away, then settled down with the baby between her paws. In a strange behavioural twist, which was more than likely an instinctual moment, the baby baboon held onto the lioness’ chest and tried to suckle. 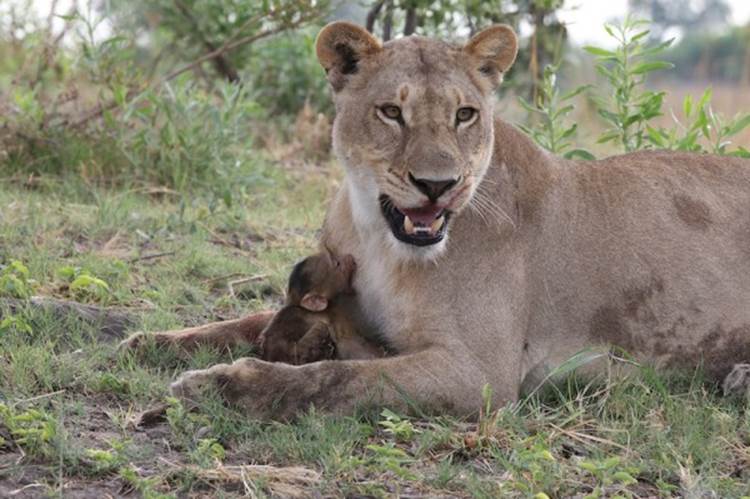 A while later the lioness got distracted as two male lions arrived on the scene. Their advances were met with aggression by the lioness although it was unclear as to whether this was because she was defending the baby baboon or just uninterested in their mating advances? 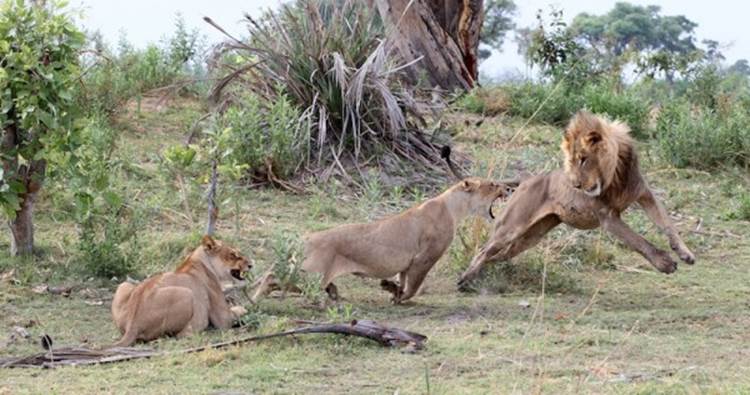 But here’s where it gets interesting: Waiting in a nearby tree was a big male baboon clearly intent on saving the baby. The male lions were causing such a ruckus that it presented a short window of opportunity for the brave male baboon to make his move. 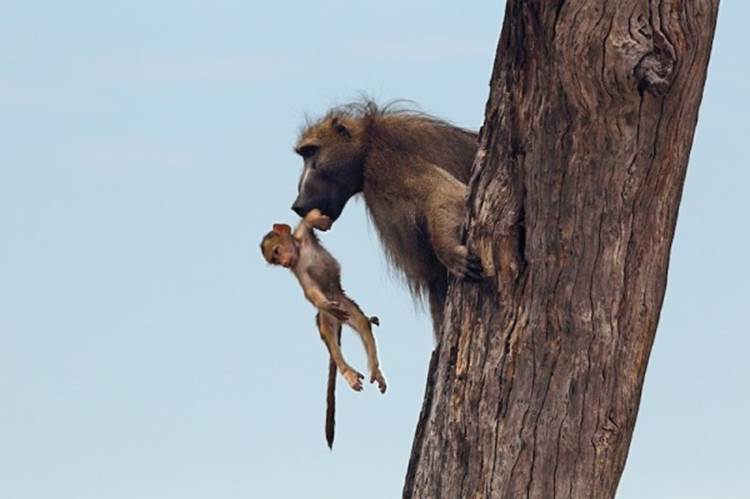 He swiftly descended the tree, grabbed the baby baboon, and head back to safety of the trees with the rest of the troupe, baby firmly in his grasp. 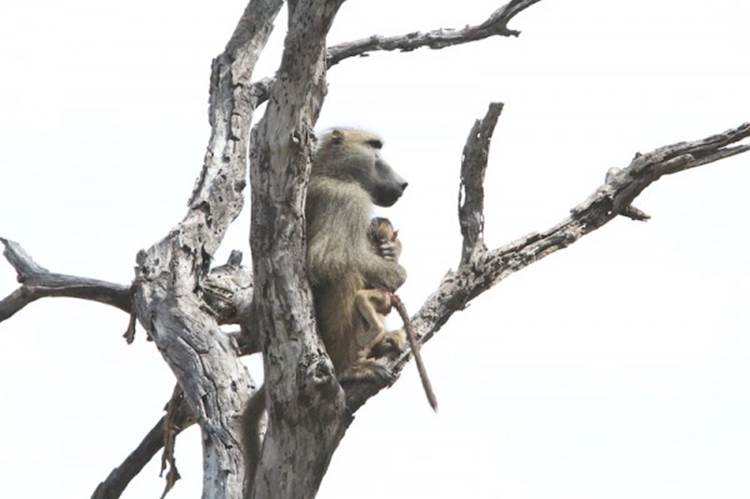