The Chobe Riverfront, or Serondela, which is situated surprisingly near to Kasane and Victoria Falls, runs along the North Eastern border of The Chobe National Park, is made up of lush flood plains and dense hardwood forests. It is undoubtedly the most densely populated area of the park, offering unsurpassed game viewing opportunities whether visiting in the dry season or the wet season.

Because of the vast numbers of wildlife that can be viewed in this one area, The Chobe Riverfront is also the most frequented area of the park. While this poses a deterrent to some, this would be a mistake as it is truly one of the most beautiful and generous parts of the Chobe National Park in terms of game viewing and bird watching.

The Serondela is also home to the largest and densest population of Elephant in Africa. While visiting the Chobe Riverfront you are guaranteed to see the largest herds of Elephant you will ever encounter, with arguably the largest elephants on the continent, in their natural environment, frolicking, drinking, swimming and behaving as elephants otherwise would.

If however the lure of vast numbers of Elephant families is not enough, the Chobe Riverfront is also home to a mind blowing number of other well known and lesser known African animal species. You can expect, on any given game drive, to view as many as 15 different species of wildlife including, giraffe, zebra, cape buffalo, wildebeest, lion, leopard, spotted hyena, cheetah, impala, warthog, bushbuck, monkeys, baboons, kudu, jackal, hippo and crocodile as well as the more unusual species of antelope including roan, sable, tsessebe, eland, red lechwe and the rare Chobe bushbuck and puku antelope.

For the avid bird-watcher the Chobe Riverfront or Serondela is a birders paradise. The riverfront is host to an extrordinaraly varied collection of up to 450 recorded bird species including many species that migrate to breed in it’s wonderful climate. You can expect to see and hear the African fish eagle, Sacred ibis, Egyptian Geese, cormorants, darters, Spur-winged Geese, pel’s Fishing Owl, carmine Bee-eaters, most  of the kingfisher family, all the rollers, Martial Eagle, and many members of the stork family.

The wide and varied animal and bird life of course makes the Serondela a photographers dream, and with access to the wildlife from both the roads and via cruises on the river itself there is ample opportunity for those momentous and unforgettable images to be shot.

While the Chobe Riverfront is a popular destination at all times of year, it is important to remember that the road network, as with all of Northern Chobe, is limited, and can be even more so during high periods of flood. When planning your 4×4 self drive to this part of the Chobe National park, ensure that you check the road conditions and whthere there have been any changes made to the road flow, as, in some cases, the park can opt to change roads to one way routes in order to aid the road network congestion. 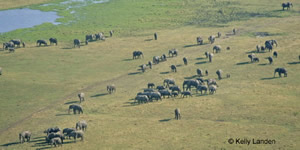 image courtesy of Elephants Without Borders 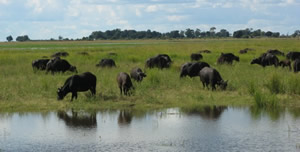